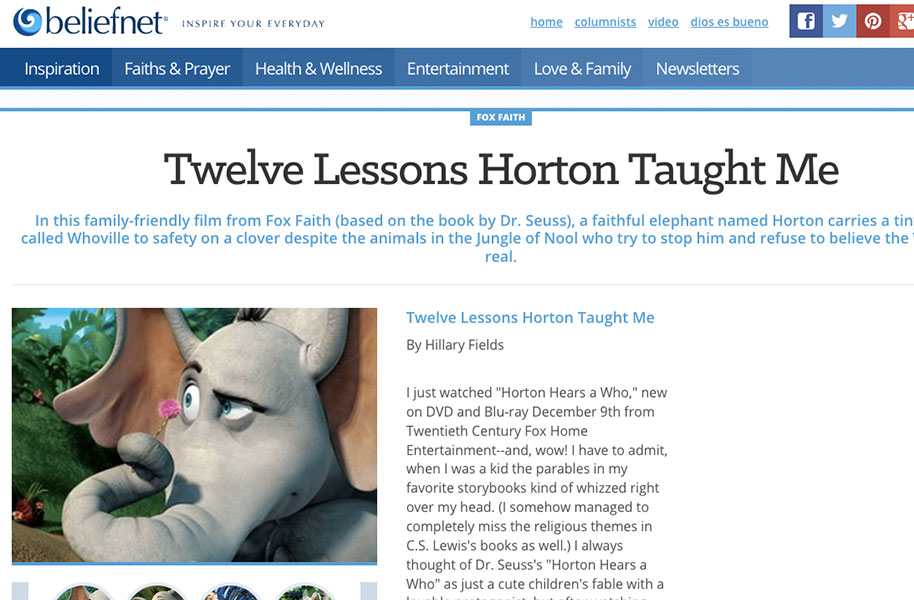 I just watched “Horton Hears a Who,” new on DVD and Blu-ray December 9th from Twentieth Century Fox Home Entertainment–and, wow! I have to admit, when I was a kid the parables in my favorite storybooks kind of whizzed right over my head. (I somehow managed to completely miss the religious themes in C.S. Lewis’s books as well.) I always thought of Dr. Seuss’s “Horton Hears a Who” as just a cute children’s fable with a lovable protagonist, but after watching the movie as an adult, Horton’s tale has also opened up many powerful lines of spiritual inquiry in my mind. Witnessing our elephant hero’s unwavering faith and his determination to stick up for the helpless, even in the face of tough opposition and the ridicule of his peers, made me realize there are some strong spiritual allegories here that are worth investigating.

So, come along as we explore some of the spiritual lessons of “Horton Hears a Who.”

A Person’s a Person, No Matter How Small!

Size doesn’t matter–whether you’re as big as an elephant or as small as a speck, your life has meaning. The people of Whoville may be tiny, but just like the rest of us, they have lives–and perspectives–that feel very real to them, from the mayor’s troubled son to the willfully ignorant Whoville council members.

There are many ways to look at this idea, of course. But my takeaway was that it’s vital for us humans, like Horton, to concern ourselves with the smallest and most helpless among us, those who don’t always have a voice. We must speak out for them and respect their needs. And if you’re one of those people who feels small and unheard–like the Whos–well, yell louder and louder! Demand to be noticed. It’s your due.

It’s All a Matter of PerSPECKtive

The folks on Horton’s “speck” don’t know they’re small by Horton’s standards, just as Horton can’t see he’s gigantic to the dwarfish inhabitants of Whoville. It comes as quite an eye-opener when both Horton and Whoville’s mayor confront the idea that their place in the universe is relative, and there may be more to it than either of them can see in their day-to-day lives.

Gaining perspective is important! Whether it’s realizing a problem is small in the grand scheme of things, or beginning to understand another person may have a point of view that’s just as valid as your own when you look at it through their eyes, our elephant friend’s experience teaches us to keep an open mind to all the possibilities.

Having Faith in the Unseen

“Horton Hears a Who” is chock-full of parables about taking things on faith. While the other animals in the Jungle of Nool where Horton lives believe only in what they can see, hear and touch, Horton has the openness and sensitivity–not to mention imagination–to make room in his heart for a larger worldview. His great (some might say godlike) ears can hear the tiny voices of the Whos on their microscopic world, and his even greater spirit can conceive of something wondrous that exists beyond the visible. Yet Horton’s faith is also in himself–when others question his perceptions, Horton stands firm and continues to believe in that little voice he hears in his head, staying faithful 100%.

Horton’s faith allows for wonderful new experiences to come into his life. It also makes him a steadfast and true person with a strong sense of self. Though it can be tough for him when he’s alone in his beliefs, it’s ultimately vastly rewarding.

Taking Responsibility for Our World

While not every speck may contain a world of people needing our help, it’s important to ask, What if it did? Would I be willing to do as Horton did, sacrificing for the good of others?

Horton’s role in the Jungle of Nool is as a teacher of children. In the beginning of the movie, we watch Horton gathering his students for a tour of the flora of their native habitat, giving them an appreciation of the world that is their home and their role in its ecosystem. When Horton encounters the speck, he carefully shepherds it onto a clover for safekeeping, and later his impressionable friends begin gathering their own imaginary worlds on flowers to carry around. He’s taught them to revere the natural world–and imaginary ones–showing how they need our help to survive. Developing a caring attitude toward our planet, seeing ourselves as its stewards, is a lesson we could all benefit from!

How many of us have stood back in a crisis, thinking to ourselves, “Someone else will handle this; why should I get involved?” Horton, as the only one who can sense the Whos’ plight, doesn’t have the luxury of leaving his responsibilities to somebody else. Yet he still could have chosen to walk away and left Whoville to its fate–no one would ever have known. Instead, our elephant hero steps up and accepts the task that’s thrust upon him, and sees it through in spectacular fashion. He doesn’t wait for someone to tell him how to handle the situation or take over for him. He just stampedes onward through all obstacles to see the job through. That determination and grit make Horton a wonderful role model.

Find a Sense of Purpose

Horton is needed by the Whos, just as he was by the egg he hatches in Dr. Seuss’s other story, “Horton Hatches the Egg.” Protecting the speck becomes his own personal cause and gives deeper meaning to his formerly insouciant life. As he notices in the movie, his new sense of purpose is really invigorating.

Being needed is a great feeling. Why not join an organization or cause where your input will be invaluable too?

Let People Be Who They Are

The other animals in the Jungle of Nool, especially the sour-faced Kangaroo, feel threatened by Horton’s revolutionary beliefs. (Yes, I think it’s safe to say there’s probably a Jesus parallel here.) They don’t want his “bad influence” to corrupt their children’s minds or change their way of life. The forces of conformity nearly prevail over those of imagination and self-expression. Yet what the animals discover when Horton is validated is that all of their lives are richer for the diversity of their beliefs. Had his persecutors left Horton alone from the start, or better yet, listened to his different take on things, they might have learned a lot about the world.

When Whoville is threatened, all the Whos must band together to save their world. Yet the littlest of them, feeling his contributions are not appreciated, holds back until it’s almost too late. When finally he throws his voice in with the others, that last little bit of extra effort tips the scales and turns the tide for all of Whoville, saving everyone.

Sometimes it can be a lot harder to see the effects of our contributions in real life, but here’s where that faith comes in–even if you don’t see an immediate result, remember it’s the cumulative effect of our efforts that really wins the day, whether it’s an important election where every vote counts, or banding together with your whole town to reinforce a levee that’s threatening to overflow. No effort is too small to make a difference!

Everything Horton does in the Jungle of Nool has a huge ripple effect on the people of tiny Whoville. If he puts the clover their world rests on in the shade, their sky goes black. If he breathes on it, it melts their snow. Similarly, he can imagine his own larger world as just one more speck in a vaster galaxy, affected by an infinite array of seemingly small actions (like the butterfly effect). It’s a gentle lesson in the impact we all can have on those around us, from transforming our environment to saving each other’s lives. We don’t exist in a vacuum, but are dependent on a huge network of cooperation to maintain our way of life. Let’s be kind to those around us–including our planet!

Watching Horton haul his huge elephant bulk over that gaping chasm, suspended only by the flimsiest of wooden bridges, illustrates perfectly the fear–and courage–inherent in any big undertaking. In Horton’s case he’s doing it to protect the all-important speck, but it doesn’t matter what the cause is. No great undertaking is ever achieved without significant risk. (I’m not advocating stepping out on any actual limbs here, but you get the point….)

Nobody likes to be the one to rain on the parade, but sometimes it’s gotta be done. Look at the mayor of Whoville, for instance. After a century of blissful existence, where nothing has ever gone wrong in their world, he’s forced to be the downer at the party and warn his people something’s amiss. He faces stiff opposition from the town council, but that doesn’t stop him from doing what he must–and ultimately saving everyone’s lives. What’s worse, taking some heat for blowing the whistle, or living with the guilt of keeping quiet when you might have done something to help?

Horton wouldn’t be Horton if he hadn’t forgiven those who persecuted him. Despite their cruelty, mocking him, caging him and poking him with sticks, Horton never holds a grudge. He doesn’t even take time for a petty little “I-told-you-so” when he’s proven right and his tormentors are embarrassed by their mistakes. Instead, he immediately reaches out to them and makes a peace offering, even though they obviously wouldn’t have done as much for him. Horton the elephant is, in every way, the bigger person–a lesson we can all learn from.