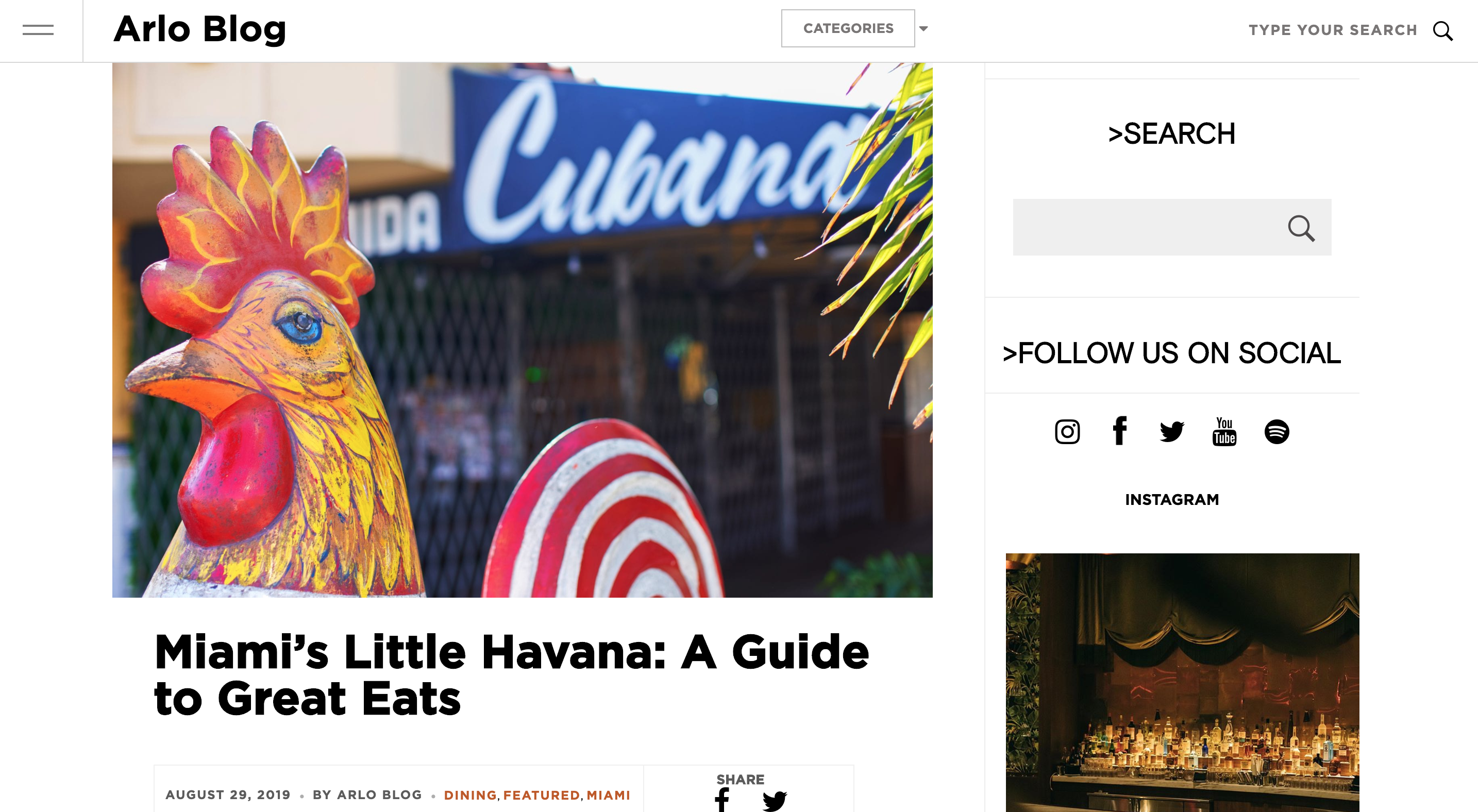 If you’ve never had a Cuban sandwich, well, your life has not really begun. Yet the food in Little Havana goes far beyond the humble and heavenly “cubano.” And (gasp!) some of the best restaurants in Little Havana aren’t even Cuban. Plan to return for several meals if you want to make sure you get the full flavor of the neighborhood.

First though, what are the famous foods of Little Havana? And, hold up; priorities–what and where IS Little Havana? Let’s answer the second question first.

Little Havana stretches, roughly, from just west of Downtown Miami, bounded by the Miami River to the north. It contains Marlins Park and is the home of the justifiably famous Calle Ocho walk to the south. It’s full of great bars, restaurants, clubs, galleries, and so much more. Settled by Cuban émigrés and their descendants, it’s among the most vibrant neighborhoods in Miami, and a favorite of tourists as well.

So, food: Just some of the classic Cuban foods for which Little Havana is famous are: rice and beans, fritas, carne asada, queso frito, fried shrimp, flan, and of course… Cuban sandwiches.

The Cuban Sandwich—AKA the cubano—is the most famous of all Miami Cuban foods. Think pork, pork, pork. And a toasted Cuban roll. And mustard, cheese, and pickles. Sounds simple, but these sandwiches are sublime, with slow roasted marinated pork, oftentimes ham as well, and cheese to marry it all together. Here are some spots to try out:

Yes, it’s crowded, but for a reason. Since before the neighborhood was even trendy, Enriqueta’s has been doing its thing, which is serving up traditional Cuban comfort food without frills. You’ve got to go for the buttery Cuban bread that pairs perfectly with their bacon and egg breakfast, or have a lunch of pan con bistec (steak sandwich) and the pan con lechon (pork sandwich) served with shoestring fries. The takeout window is your best bet for a speedy sammich-and-go, or just to enjoy being outside while you eat.

“Neighborhood-y” well describes this sandwich (er, sanguich) shop serving much more than the homey cubano. Also try the croquettes, the chicarrones, plantain fries, or the signature Sanguich de Miami, a turkey sandwich that’s anything but dull. Wash it down with a timba batido (milkshake) which is another Little Havana Cuban favorite. Then stumble home groaning from a full belly.

This translates to “the king of the burgers,” and Miami-style burgers, known as “fritas,” are indeed fit for a (very hungry) king. They come smothered in sautéed sweet onions and shoestring fries, all on a fluffy Cuban roll, and no place does a better burger than El Rey. It’s served lunch counter style—all sandwich and no pretense.

When you’re done snarfing sammiches, you may want to branch out. Here are some other great restaurant options in Little Havana.

Yep, there’s excellent Thai food in little Havana! If you’re in the ‘hood but not the mood for cubanos, Lung Yai serves up some of the best Thai cuisine and tapas in Miami. Known for their small plates and dishes that go beyond boring old pad thai, this is a perfect spot to refuel during a night of nightclub hopping or an afternoon of shopping. But be warned—long waits are often to be expected.

The brainchild of chef-owners Justin Sherrer and Lisetty Llampalla, this eatery in the once iffy area north of Calle Ocho has become an oasis of excellent eats and cozy vibes. From arguably the best croquettes and fried rice in Little Havana, to unpretentious locally sourced meats, veggies and fish and craft beer, everything is fresh and lovingly prepared. And the tucked-away intimate courtyard setting makes this a wonderful spot to decompress from a crazy day of sightseeing.

La Camaronera is part seafood joint, part fish market, and all fresh. Some of the best fried shrimp (camarones fritos) in the city can be found here, whether served in a sandwich with savory sauce, or with a side of fried green plantains. Don’t neglect to try the fried snapper sandwich, which folks return for again and again. Finish off with a serving of flan for a sweet finale. The fish market side lets you choose from whole fresh-caught fish, crab, and lobster, so if you’ve got a grill or a pot, you can cook up your own.

When you want to finish off a meal with something sweet, head to Azucar Ice Cream Company for an ice cream–which, we’re reliably told, is pretty much mother’s milk among Cuban folk. While all the offerings here are out of this world, don’t leave without a taste of their internationally renowned “Abuela Maria.” Despite the name, we’re not talking about your granny; it’s a kind of ice cream popular around here, and for good reason. It’s made with the old-school afternoon snack Goya cookies of the same name, to which they add guava paste and cream cheese chunks, then magically make an amazing ice cream out of the concoction. Also, don’t leave without trying the café con leche flavor, the sweet plantain, or the key lime for true Florida flavor. They’ve also got seasonal flavors from olive oil to avocado, so take a leap of faith and taste something new while you’re getting your scoop on.

Stay tuned for more Miami restaurant recommendations, but these should get you started on your culinary journey. Happy eating!