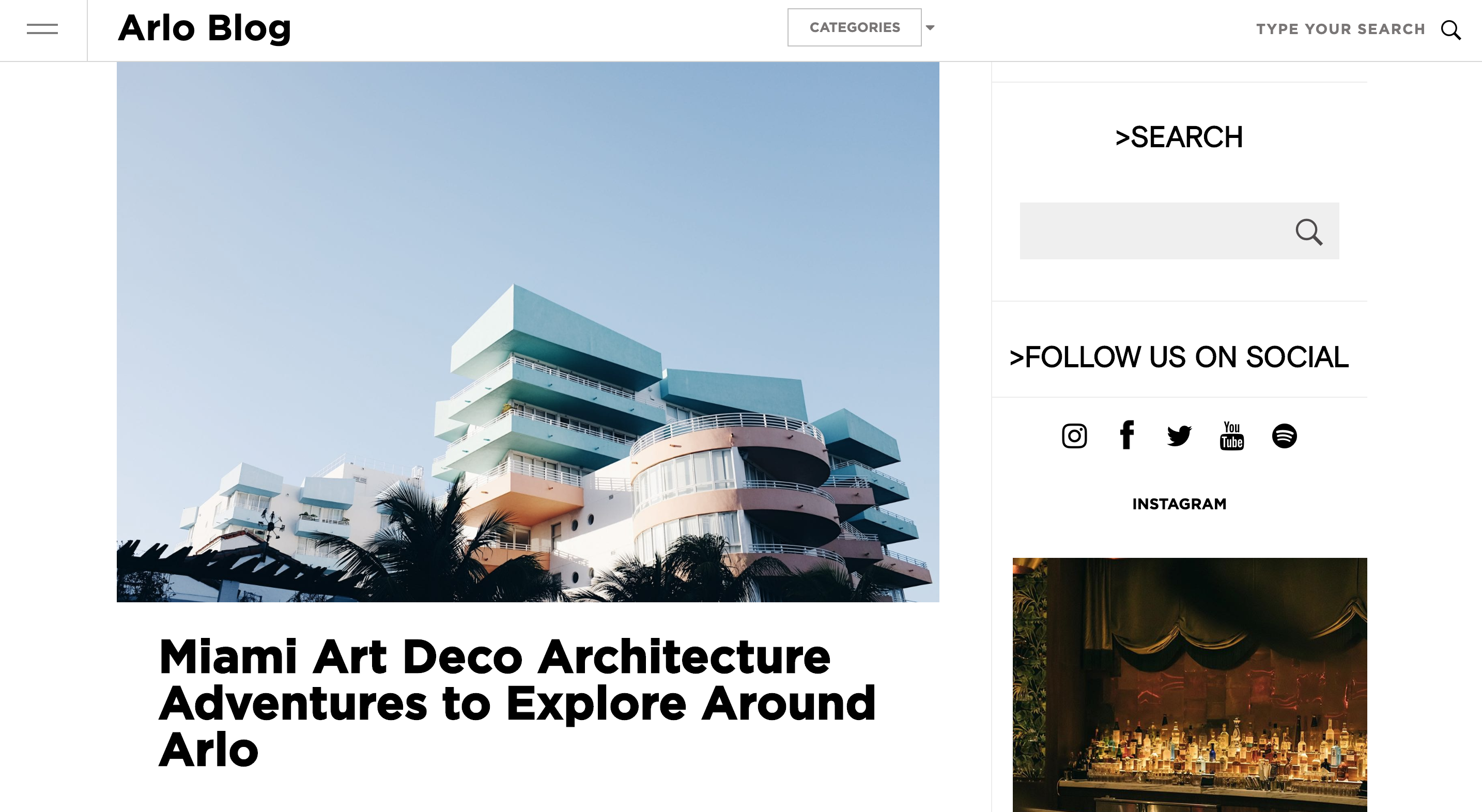 Nautilus by Arlo is a South Beach jewel, but it’s also a prime example of the bold and downright fun architecture which characterizes Miami/South Beach and makes it a destination like no other. Designed by Morris Lapidus, the father of “Miami Modern” architecture, the 250-room Nautilus is full of fabulous touches that scream Miami Beach. So, to celebrate our part in this American architecture movement, we thought we’d show you around some of the other amazing examples of “Miami Modern” (MiMo for short) and Art Deco architecture that give the area its unique character. From restaurants to theaters to museums and beyond, you’ll see how alive and vibrant the movement remains. (And, yeah, some of these are hotels, but trust us, we’re the best place to stay!)

First off, what IS Miami Modern, and what makes this art deco spinoff so freakin’ cool? Well, it’s a post-war invention evolved from art nouveau, and it’s all about chrome-trimmed, pastel-painted, terrazzo-floored, porthole-windowed, neon-lit, brat-pack boomtown exuberance. The art deco movement here began in the late 20s, and it wouldn’t have been unusual to see gangsters like Al Capone smoking a stogie as he took a break from mayhem to enjoy Miami’s warm weather. Later, in the 50s and 60s, the shift to “Miami Modern” updated the vibe with the post-war economic expansion that allowed Miami to become a playground for wealthy vacationers feeling optimistic about America’s innovative future.

Alive and well and as rad as ever now, it’s worth taking a walking tour to check out the Art Deco Historic District if you want to catch the flavor of Miami while you’re here—and of course snap some awesome pics along the way. (Check out hashtags like “Art Deco Miami” or “Miami Modern” on Instagram if you want to see your competition.)

Here are a few prime examples of Miami Style architecture. The Art Deco Historic District is an easy one-mile stretch from 5th Street to 23rd, encompassing Collins Ave, Ocean Drive, and Washington Ave, so you’re never far from the shore, and easily able to stroll it with time for other activities the same day.

Located at 1001 Ocean Drive, home of the Miami Design Preservation League and an Art Deco gem in its own right, the Art Deco Welcome Center is the perfect place to begin your exploration. Start your tour here to grab a map, get the lowdown on your visit, listen to lectures, visit the onsite Art Deco Museum, buy a souvenir, join a guided tour or self-guided audio tour. Or, you can even arrange a private tour. Themes range from “South Beach Scandal,” where you can explore the underbelly of the roaring 20s and prohibition era, to gay and lesbian focused, to the Jewish history of Miami, and more. Let the experts guide you so you don’t miss a thing.

The Delano, The Parisian, The Colony Hotel, The Park Central (Now Celino South Beach), The Beacon South Beach, The Essex House and The Clevelander Hotel are just a few examples of hotels you will want to cruise by and ogle. All have amazing touches, from the longest swimming pool in Miami (The National Hotel), to the terrazzo floors of the blue-fronted Celino, which was once the favored haunt of stars like Rita Hayworth and Humphrey Bogart. The Villa Casuarino used to be Gianni Versace’s mansion, and is now also a fabulously gaudy and over the top extravaganza that must be visited to be believed.

Senor Frogs: Yes, it’s a Senor Frogs now. Sigh. But this classic construction was built by famed Modernist architect Henry Hohauser, who was responsible for quite a few of the landmark buildings of the era. If you think it looks a bit like a pastel blue wedding cake on the outside, we wouldn’t blame you. Designed in 1940 as Hoffman’s Café, it’s a landmark you can still have a blast at now, provided you like yards of beer, frog festooned décor, and loud drunken patrons. (And who doesn’t, really?)

For a complete 180, try Osteria del Teatro. This Italian fine dining restaurant is a favorite among locals and visitors alike. The gorgeous interior surrounds you with old-world elegance while you indulge in rich, savory classics and fine wines that’ll make you feel as fancy as a classic movie star.

The Colony Theater, which was built in 1935 at the behest of Paramount Pictures, is an exquisitely preserved example of the era, with a marquee straight out of the golden age of cinema, and an interior filled with classically art deco geometric details and elegantly restored touches that make this the perfect venue for hosting all sorts of film events and festivals.

Don’t neglect to visit the Olympia Theater either. Designed by John Eberson in the Mediterranean revival style back in the 1920s, and host to the Miami International Film Festival, it’s also a cultural arts and concert venue, among other things. With its ornate, fairytale interior, it’s simply got to be seen to be believed. So do try and take in an event while you’re in town.

Aside from the Art Deco Museum at the Welcome Center, there’s also The Wolfsonian (Florida International University). This pink-and-black striped Mediterranean Revival museum, library, and research center started out life as a storage building in 1927, but now houses a fascinating collection of more than 180,000 19th and 20th century objects from everyday household items to artwork and architecture. It’s definitely worth a stop in to admire both the exterior and the exhibits.

Then there’s the Bass Museum. Once the Miami Public Library and Art Center, and built in the 30s by renowned architect Russell Pancoast, its façade is literally made from crushed coral, with murals and bas reliefs that capture the lively history of Miami. Inside you’ll find contemporary international art and design, a sculpture garden, education center, and a lot more.

Whether you spend a few hours or a few days exploring these evocative sites, you can’t help feeling you’ve entered another world; one which will linger with you long after you’ve left.