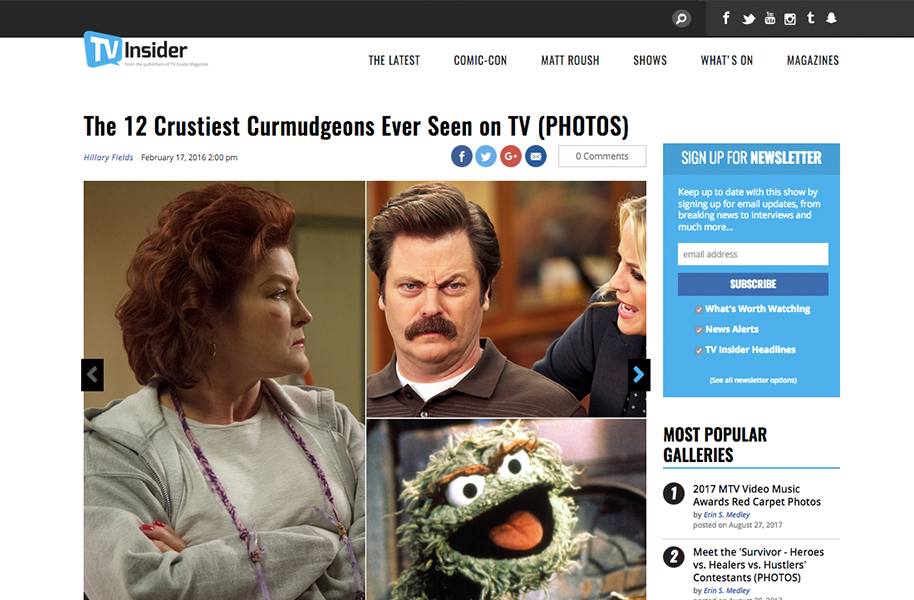 The 12 Crustiest Curmudgeons Ever Seen On TV

Ever wake up on the wrong side of the bed? Well, these guys woke up on the wrong side of life. They’re grumpy, grouchy and outright rude, but (somehow) they manage to be loveable anyway. Maybe it’s because they say what we’re all thinking–or, they just don’t have that filter (or self-censorship) like the rest of us. While “curmudgeon” usually describes men, some women can be downright dour as well. We celebrate the crustiest of them all by highlighting some of TV’s most notorious naysayers.

The director of Pawnee Parks and Rec department may not have time for your bull, but he’s got all the energy in the world for breakfast meat. If it’s on the bone or made of bacon, stay outta his way. This rugged, pull-yourself-up-by-your-bootstraps curmudgeon kept a shotgun on his desk and worshipped author Ayn Rand. Ironically, he was immune to the irony of a small-government fanatic working for a government bureaucracy, but his cutting wit and eminently quotable sayings made him a fan favorite on the NBC show.

What is it with crotchety men and crappy armchairs? When a bullet wound left Seattle’s most peevish former detective Marty Crane (John Mahoney) with a limp and a cane, he was forced to move in with his son Frasier (Kelsey Grammer), the two men clashed on everything from Ballantine beer vs. pinot grigio, baseball vs. opera, sleek sofas vs. clashing chairs. Sharing Frasier’s swanky apartment proved a big adjustment for the wildly different men… especially when Frasier tried to ditch Marty’s moth-eaten recliner.

Sophia (Estelle Getty), a Sicilian immigrant by way of Brooklyn, was never afraid to let anyone know when they were being a dope. Since a stroke left her without the part of the brain that handled tact, she often felt free to sling insults far and wide. If they hadn’t been so hilarious, the gals might have put her back in the retirement home that daughter Dorothy (Bea Arthur) rescued her from. Thankfully, audiences got to watch the grumpy lady’s gleeful, rapid-fire zingers for 10 years of the classic series.

“Red” (Kate Mulgrew) gives the boys a run for their money in Netflix’s original series. Ruling the prison kitchen with an iron fist and spiky (dyed) red hair, this Russian termagant has a softer side she shows only to her close friends. Once you’re under her wing, she’ll fight like a mama bear for you, but get on her bad side and… well, don’t eat the food.

House (Hugh Laurie), might save your life with his brilliant diagnoses, but he’d make you wish you’d never been born before he was done with you. House seemed to loathe all his patients and everyone else at fictional Princeton-Plainsboro Teaching Hospital, except for his friend Wilson (Robert Sean Leonard), whom he tormented in a twisted show of affection. The egotistical doc also played pranks and pitted his team against one another in ways that were anything but funny except to himself. And over eight seasons, audiences tuned in less for his brains than for his shocking behavior, which could only be (partially) explained by the constant pain he suffered from a poorly healed leg wound.

“Hey, dumbass!” How’s that for greeting one’s own son? If you’re Red Forman (Kurtwood Smith), it’s a given. The snide, plain-speaking dad always felt the need to keep son Eric (Topher Grace) from getting too lovey-dovey by reminding him constantly of his hard-ass toughness. A Navy veteran, Red saw the disco world of the ‘70s as an affront to America’s greatness, and he hated letting anyone see his softer side—though occasionally his pride did leak out, like when Eric and Donna (Laura Prepon) got engaged.

Though Moe the bartender could give him a run for his money, Charles Montgomery “Monty” Burns (voiced by Harry Shearer) wins the award for nastiest man on The Simpsons. Stingy, self-interested and criminally negligent in maintaining the nuclear power plant that provides much of his wealth, the richest man in Springfield couldn’t care less who he steps on so long as he gets his way. Older than dirt and prone to “releasing the hounds” on unsuspecting intruders, Mr. Burns makes a great foil for hapless Homer, and he’s the guy you love to hate—especially when he’s bossing poor Smithers around.

Waldorf and Statler (The Muppets)

Waldorf and Statler, named for two famous old New York City hotels, are snide, snarky and quick to criticize everyone. Whether it’s from balcony seats high above a theater stage or sitting in the front row, these old geezers lord it over their fellow puppets—but it’s impossible to keep from cracking up at their well-timed witticisms.

Oscar the Grouch makes his home in a trash can, and unlike Sesame Street’s other mostly cheerful residents, he only loves one thing… trash. He’s even got a song about it, aptly called “I love trash,” and another of his favorite songs is, “I’m happy when I’m sad.” As his name suggests, the Grouch has a real knack for looking at the negative in every situation, but even though he’d never admit it, he does have a real soft spot for Maria.

In Neil Simon’s play turned ‘70s TV series, sportswriter Oscar Madison (Jack Klugman) terrorized uptight new roommate Felix Unger (Tony Randall) with more than just his slovenly habits—he was gruff, nasty and full of complaints. This uber-curmudgeon hated being policed by Felix and was perfectly happy to stay a divorced, beer-swilling, cigar-smoking slob forever. In the end, however, friendship still won out over smelly socks. In 2015, the series was even remade with Matthew Perry (Friends) as Oscar.

Archie Bunker (All in the Family)

From his saggy old armchair, Archie Bunker (Carroll O’Connor) ruled the roost, doling out abuse, bigotry and reluctant affection to the entire family, especially his son-in-law Michael (Rob Reiner), whom he loved to call “Meathead.” Bossing poor Edith around and sending her scurrying to get him another beer, cigar-smoking Archie was the epitome of an aging patriarch uncomfortable with a changing world in this ‘70s series. But underneath it all, Bunker had a heart of gold—even if one often needed a magnifying glass to see it.

Who needs fictional curmudgeons when you’ve got a real-life one in Andy Rooney? For over 30 years, this veteran TV writer and journalist held forth from his desk, sharing his astute (if disgruntled) observations on every aspect of modern life in “A Few Minutes with Andy Rooney” on CBS’s 60 Minutes. His commentary was biting, funny and always on point, and as fellow newsman Morley Safer put it, “He had an axe to grind about almost everything.”