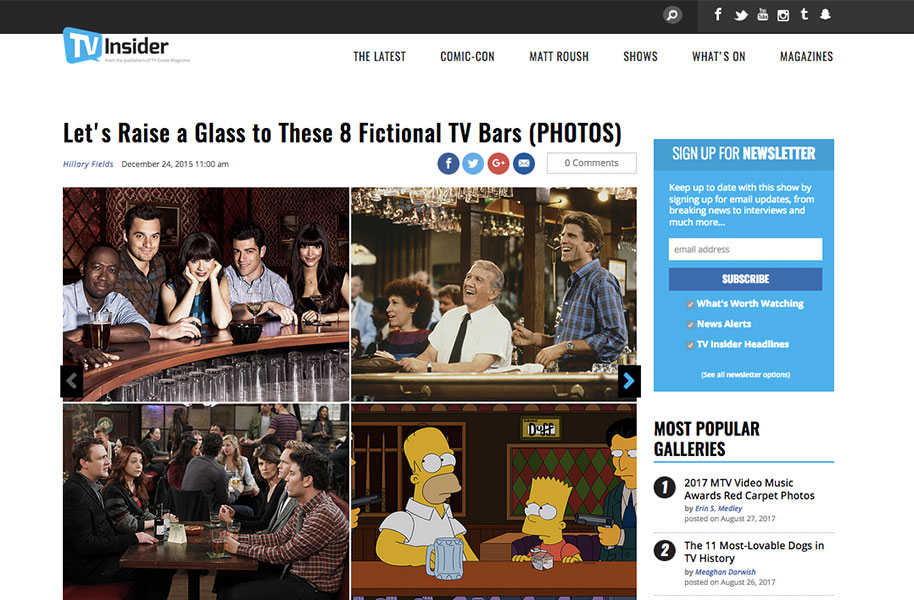 Let’s Raise a Glass to These 8 Fictional TV Bars

In life, some of our most memorable moments (and, let’s face it, some of the hardest to remember) happen in bars, whether it’s a cozy neighborhood haunt, a dive-y hole in the wall, or a club filled with cocktail lovers. And even your fave TV characters love frequenting local places with liquor licenses, so we rounded up nine fictional bars worth toasting to on TV. Let’s all raise a glass to these intoxicating taverns.

It’s the quintessential bar where everyone knows your name—and your business. From Sam and Diane’s classic and turbulent romance to Carla the waitress’s biting wit to the banter of Cliff and Norm holding forth in their corner with a never-ending pint, all of life’s funniest and most poignant moments played out right there, beside the bowls of peanuts and cocktail napkins.

MacLaren’s Pub (How I Met Your Mother)

Based in part on a real NYC bar called McGee’s, where the show’s creators used to drink, and named for co-creator Carter Bays’ assistant Carl MacLaren, MacLaren’s Pub saw a lot of action over nine seasons. Not surprising since the apartment shared by Lily, Marshall and Ted was right upstairs! At the pub, Barney struck out with countless women, the whole gang got banned in an episode called “The Perfect Cocktail” and they even became bartenders (briefly) in “Three Days of Snow.”

A bar so dingy it’s never been cleaned… Moe’s Tavern is where you go to grab a pint of Duff’s, get caught up in illegal schemes or get a dose of owner Moe’s unsympathetic advice. Lenny, Carl and Barney round out the hard-luck types who frequent this dive, and Bart often dials in with a prank call, much to Moe’s chagrin. Fun fact: bands from Aerosmith to U2 to the Red Hot Chili Peppers have also played its tiny stage.

When your roommate’s a bartender, you’ll probably wind up spending a fair bit of time in a bar. At least that’s what happens when Jess (Zooey Deschanel) moves in with three single dudes, including bartender Nick Miller (Jake Johnson). The unnamed watering hole is actually based in part on LA’s The Prince, which has been the inspiration for many a TV show pub.

Where do you go to celebrate cracking a confounding case? For the Jeffersonian team, it’s the Founding Fathers. Dimly lit, classy and always ready to serve, could there be a better name for a D.C.-based bar? For Booth (David Boreanaz), Brennan (Emily Deschanel) and the rest of the quirky crime-fighting forensics crew, it’s a great place to cool off after putting a criminal on ice.

Located in “a scary alley in South Philly,” the always unsuccessful Paddy’s Pub is still going strong into its tenth season, despite the frequently despicable antics of its owners, Mac, Dennis, Sweet Dee, Charlie and Frank (played by the inimitable Danny DeVito). “The gang,” as they’re known, epitomize cringe-humor that’s best washed down with strong spirits.

When you’re in your thirties and have a hard time hooking up, the Black Eyes Bar (frequently mispronounced with hilarious results) is the place to be. Although protagonist Danny Burton (Chris D’Elia) gets lots of ladies’ numbers, he has yet to make a relationship stick. Still, he’s miles ahead of his new roommate, bar owner Justin Kearney (Brent Morin) and Justin’s misfit friends. Our advice? Relax in those green leather booths, enjoy open mic night (with a cameo by Ed Sheeran), and grab another drink.

A super cool superhero needs a super sleek lair, right? Oliver Queen, AKA the Green Arrow (Stephen Amell), sets his up in a convenient spot: at club Verdant, where he and his crew of crime fighters can keep an eye on all the action, and where his sister Thea (a badass heroine now in her own right, played by Willa Holland) manages to make far more than just a cover. The name Verdant (hint: it means green) doesn’t give it away, at least until Season 3 when they’re forced to abandon the hideout for—ahem—greener pastures.