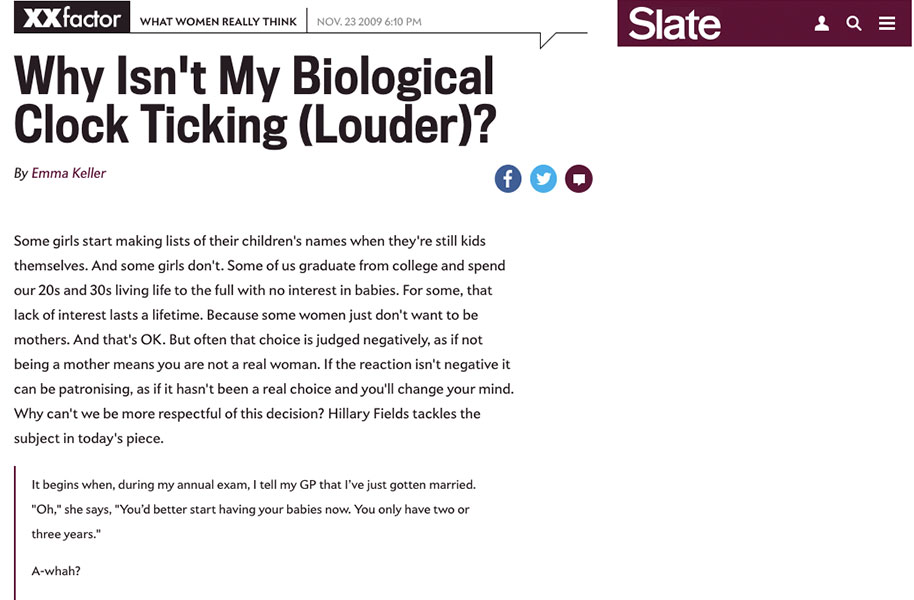 It begins when, during my annual exam, I tell my GP that I’ve just gotten married. “Oh,” she says, “You’d better start having your babies now. You only have two or three years.”
A-whah?

When I’m finished doing my double take, I am able to focus in on the tiny, earnest woman who is still talking at me. “Now that you’re married, you can start to have children. But since you’re 32, you should start now. Women over 35 have a much harder time conceiving and carrying healthy babies.”

I haven’t been living under a rock for the past three decades, so this is not news to me. “I hate to break it to you, doc,” I say, “but I was capable of bearing children before I wed. And you didn’t bring up the subject then.”

She smiles as though this is a very funny joke, and then gets serious again. “No, really. Start thinking about your family right away, or you will regret it.”

This does not appear to be information of great import to my physician. “Even so, you should do it now. You don’t want to wait until it’s too late, and you find out you haven’t any eggs left.”

Demurring as politely as I can under duress, I reply, “I’m not going to have children just in case I might someday want them. That doesn’t sound like a smart idea.” I figure this will be the end of the subject, and we can turn to more important things, like my ludicrously high cholesterol or the mole on my back I’m not sure I’ve always had.

“I’m serious,” she stresses with the air of a woman who wants to be 100 percent diligent about discharging her duty. “You should know that if you delay now, you may regret it later. I’m just giving you the facts.”

This is a bit pushy, even for me as a native New Yorker used to dealing with pushy people.

“I get it, Dr. ____. I’m just not in a position to bring a child into my life at this juncture. Financially, we’re not set up for it. We’d have to string the kid from a hammock on our studio apartment’s ceiling to make room for it.” Time for a new topic now, surely.

“People have children all the time when they’re not secure financially,” she presses.

“Do those kids go to college?” I shoot back.

Finally the exam (or cross-exam) is over and I’m back on the street. I find myself fuming mad, but also … ashamed.

Because the truth is, I’m not sure I’ll ever want kids, and apparently, this is unnatural.

What’s wrong with me? I’ve got oodles of awwws for puppies and kittens. I melt over baby pandas and bunnies and such. But human offspring? Not only do they all resemble Winston Churchill to me, they elicit no such admiration as did the great man. They drool, they squawk, they poop all over themselves-when they’re not vomiting, sneezing, or coughing up a tiny, itty-bitty lung.

Oh, I’ve heard the reassurances. “It’s different when they’re your own.” This pap doesn’t reassure me, however. What if it’s not different? And, hey, what if I simply don’t have a maternal bone in my body?

I’m not sure what makes me more uncomfortable. Seeming unfeeling-and unfeminine-to society at large, or wondering if, later in life, I will regret it if I don’t have children. Will my life seem empty? Will I wrestle daily with what-ifs? Do people like my doctor know something about life I don’t know?

Ever since I was a kid, I’ve sworn up and down I’d never have children of my own. Unless I were visited by the Ghost of Kiddies Future, begging me to bear them, I’ve always felt it’s … I don’t know … presumptuous to bring a life into the world without permission. Perhaps this is because, until I was in my late 20s, I myself wasn’t particularly glad to be on the planet. I suffered from major depression (among other things) and had a difficult childhood raised by parents who, it was clear, would have been better off not being parents. I was always loved, but love was an odd thing sometimes. And my mother was no great model of maternal mushiness. She was (and is) a great woman, but she simply didn’t do Donna Reed.

But wait … what about hubby? I married a man as emotionally connected as I am detached, a fella who coos “boojie boojie boo” at every tot who happens to occupy a high chair at a nearby restaurant table, a man so sweet, so full of love that I just know he’d be the best papa ever in the world. Does he secretly long for a little girl or boy? A little. But he knew the drill when he married me. I told him I might never get to a place where I wanted rug-rats.

Still, wouldn’t it be a great gift to give the man I love the children that might make his life more complete? Don’t I love him enough to rearrange my world and my expectations and my comforts, change the course of my future so that his will be fulfilled?

Honestly, I don’t know. Two-and-a-half years after that uncomfortable doctor’s appointment, trembling on the verge of statistical ovarian decrepitude, nothing has changed. I’m still child-free, still not feeling a crater of emptiness in my womb or any place else. But will that still be the case in five years, or 10, when it’s just too damn late?

I want some sort of sign to help me decide what to do. And here’s where I curse my sluggish biology. My hormones simply haven’t kicked up a ruckus to help sway me toward being a mother. They aren’t weighing in, making emotional demands, the way I hear they’re supposed to. Legend speaks volumes about the fabled biological clock that starts ticking for women, a haunting toll that begins following you around like Poe’s telltale heart, growing louder and more urgent the longer you wait. For my mom, it was one of the deciding factors in having me and my brother. One day, she says, she started looking at kids in strollers and thinking they were cute, when she had never noticed them before.

Well, they’re still not cute to me. Not yet. I wonder if someone’s smothered my particular alarm clock with a pillow, or unplugged it, or what. Because, if my doctor is to be believed, I’m counting the final seconds off on my fertility countdown, and if I don’t act soon, the option will be off the table.

Perhaps the silence is, in itself, the answer for which I’ve been waiting. Maybe it’s not meant to be, not for me.

I just wish I knew for sure.