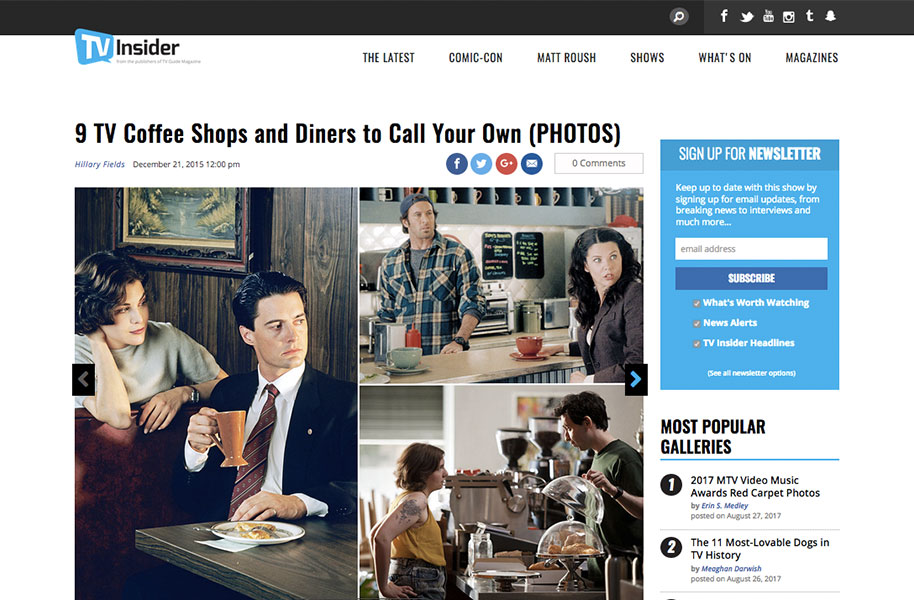 9 TV Coffee Shops and Diners to Call Your Own

Spend most of your life sucking back cups of coffee or chowing on a cheeseburger? Your favorite TV characters do, too. From greasy spoons to glammed-up java shops, we take a look at nine (mostly) fictional coffee houses and diners that served as local gathering—and gabbing—spots on television.

Though they were supposedly broke, the cast of Friends always had money to spend at Central Perk, their neighborhood coffee house. Crowded together on the orange velvet couch, constantly mocked by manager/barista Gunther, Monica, Chandler, Ross, Rachel, Joey and Phoebe found time between love crises to hang out at this Greenwich Village staple, where spoiled princess Rachel struggled to learn the ropes of waitressing. Memorably, Phoebe performed her original song “Smelly Cat” during open mic night at Central Perk… and our ears will never be the same.

The Double R Diner: where the coffee is “damn fine” and the waitresses are finer, thanks to actress Mädchen Amick playing teenage dropout Shelly Johnson. Owner Norma Jennings (Peggy Lipton) may have a ne’er-do-well ex-con for a husband, but she’s also got the most hopping eatery in town. The Log Lady (Catherine Coulson) keeps Norma on her toes with her sticky pitch gum, and Audrey Horne (Sherilyn Fenn) has been known to trance out to the tunes on the jukebox, but everyone in Twin Peaks loves the Double R. Even show creator David Lynch made a cameo appearance and swooned over the signature cherry pie in Season 2.

You wouldn’t think a guy as speedy as the Flash—AKA Barry Allen (Grant Gustin)—would need a caffeine boost, but he and the rest of the S.T.A.R. Labs team spend a heck of a lot of time at CC Jitters. The huge, cathedral-like café is where they meet to blow off steam, plan strategies for overcoming the latest metahuman invasion and hang out with Felicity and Oliver during crossover episodes with Arrow. There’s even a drink named after the Flash…and you can bet it’ll give you a rush.

Luke’s Diner is Stars Hollow’s source for comfort food, but don’t expect to get served if you use your cell phone, as the sign over the counter warns. Owner Luke Danes (Scott Patterson) inherited the place from his father (who ran it as a hardware store originally), and he’s got plenty of rules for how diners should behave…and he’s not shy about sharing them. But when it comes to Lorelei (Lauren Graham), he’s always got a soft spot—so much so that the two fell in love, and she eventually proposed to him.

Monk’s Café may be fictional, but it’s made real-life Tom’s Restaurant a tourist destination in New York’s Morningside Heights for decades since Seinfeld was filmed there (well, the exterior shots were). Jerry, George, Elaine and Kramer slid into the booths for snarkery and witty zingers while scheming up ways to seduce new loves, get over on their bosses (in George and Elaine’s cases) and philosophize about the nature of life over a good chocolate babka (served elsewhere).

On HBO’s hit series Girls, no one’s ever satisfied. Perhaps that’s why real-life Greenpoint, Brooklyn coffee house Café Grumpy, run in the series by Ray Ploshansky (Alex Karpovsky), is the perfect place for Hannah (Lena Dunham) to work—well, if you can call her half-assed efforts “work.” In real life, the chain is a bustling, vibrant coffee spot serving up every sort of espresso you could want, along with fresh pastries and a side of serious hipsterism.

It may have taken place in the ‘90s, but the Peach Pit was a throwback to the fifties golden era of diners, complete with chrome fixtures and a kindly proprietor ready to give Brandon, Brenda, Dillon, Donna, Kelly, Steve and the rest some grown-up advice when their own dysfunctional parents weren’t around. In Season 5, to accommodate a more sophisticated Beverly Hills crowd, owner Nat Bussichio (Joe E. Tata) opened up the Peach Pit After Dark with help from Dylan (Luke Perry), and fashion shows and musical acts soon took center stage. Even a young Christina Aguilera performed there!

Don’t let the eye-watering waitress uniforms fool you: Max Black (Kat Dennings) and Caroline Channing (Beth Behrs) are two hot up-and-comers with big dreams of opening their own cupcake shop—even if they have to sling hash to front the cash. Despite being polar opposites, street-smart Max and trust-fund baby Caroline strike up a lasting friendship alongside fellow diner workers Oleg, Han and Earl. On the way to their dream, the girls even open a “cupcake walk-up window” at the diner for a bit.

Any roundup of iconic diners on TV wouldn’t be complete without a mention of Alice. This old ‘70s and ‘80s show revolved around Mel’s Diner, where the eponymous Alice (played by Linda Lavin) hustled around with a carafe of coffee permanently attached to her hand, while fellow waitresses Flo (with an impressive bouffant and gum-cracking sass) and ditzy Vera Louise kept the place running despite owner Mel’s constant complaints. Alice, an aspiring singer widowed with a teenage son, embodied the hardworking everywoman we can all admire, even when she’s down on her luck. It was Flo who stole the show though, with her signature line, “Kiss my grits!”