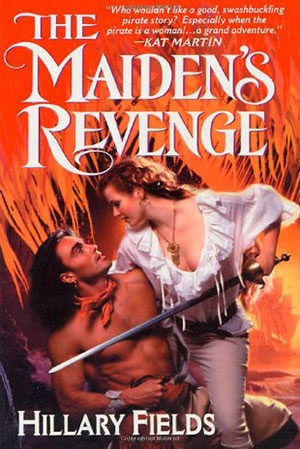 THE PIRATE
One of the fiercest pirates on the Main, the legendary Captain Thorne can raid a ship and wield a cutlass with the best. Woe betide any man who desires to get past the tempered steel to the woman holding it. Lynnette Blackthorne– a.k.a. Captain Thorne– sails the high seas with only one goal: vengeance against the man who murdered her sister. Nothing will stand in her way– especially not a silver-eyed rogue with the power to make her tremble and lose her wits to the madness of passion.

THE CAPTIVE
Everything that matters to Captain Daniel Bradley– his ship, his business, his future — has been stolen away by this beautiful buccaneer now holding him for ransom. His desire to kiss that smug look off her face is rivaled only by his determination to beat her at her own game. He’s never encountered a threat he hasn’t conquered, and no half-sized pirate wench is going to break his record of victory.

THE SURRENDER
Now, the duel of wits and desire that began the moment they first laid blazing eyes on each other is about to play out in a collision course of passionate adventure…as two formidable opponents discover the ecstasy of surrendering to the only force stronger than themselves: love.